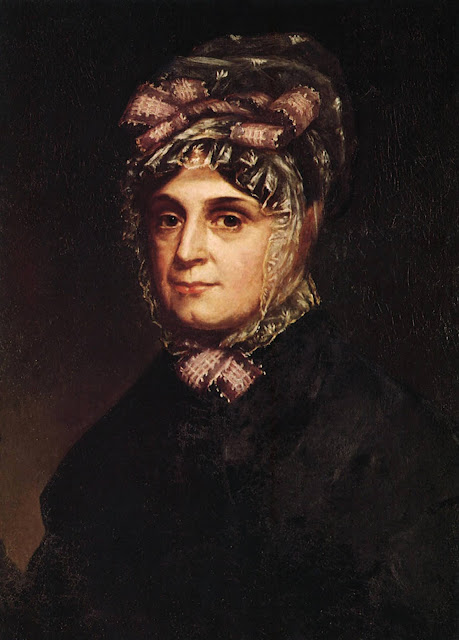 Anna Tuthill Harrison was the wife of President William Henry Harrison and grandmother of President Benjamin Harrison, and was nominally first lady of the United States during her husband's one-month term in 1841, though she never entered the White House due to the fact that he died exactly one month after the inauguration. The couple had been married 45 years when he was elected President and she had borne him five children. At the time she was too ill to travel when her husband set out from Ohio in 1841 for his inauguration, it was a long trip and a difficult one even by steamboat and railroad, with February weather uncertain at best and she at 65 was well acquainted with the rigors of frontier journeys as he was a decorated soldier. So, it was decided that his daughter-in-law would accompany him and serve until May when she planned to make the trip. She was packing when she received word of his death and never went. Accepting grief with admirable dignity, she stayed at her home in North Bend until the house burned in 1858; she lived nearby with her last surviving child, John Scott Harrison, until she died in February 1864 at the age of 88.

Posted by Changes in the wind at 6:50 AM

I always enjoy hearing about these women Thank you!

We all knew about the early death of William Henry Harrison but never heard the slightest about his wife. Thanks Monica.

What a sad ending for this first lady. Times were very different then and hard times for sure.

she looks a little masculine but still a very sad and difficult life. i wonder if 45 years of marriage was considered a long time during that period in history!!