I got a new phone for Christmas and unfortunately I can't figure out how to download my pictures to my computer so I will have to borrow some from the web for this post.

After having Christmas eve morning celebration with our kids we headed up north. Not many places can you change from not needing a coat to snow and sking in just a few hours.

The best part is that when you are tired of it...you can come back to the mild weather. We spent the first night at Little America It is a nice place to stay winter and summer with lots of pine trees and trails. The court yard was all decorated kind of like this....

and there were these huge icicles hanging from the roof in the dinning room. Although I have lived in this area all my life I had never been to the snow bowl so next morning we headed there....Was disappointed we couldn't sit and watch people ski but was a nice drive and the hot coffee tasted pretty good after trekking up the hill........This was Christmas morning and the parking lots were full!
Our next stop was Winslow, Az. The town of Winslow is pretty sad but they have a shinning star there...................La Posada This is a Harvey house that has been restored and it is wonderful!The trains still run here and the woman that owns it is an artist; She paints Historical as well as contemporary. Now, I am not much of an art fan but I find her historical paintings fascinating. She has a series of President's wives........... Here is one in the ballroom above the fireplace. If you ever have the opportunity to visit here you won't be disappointed. Their dining room is always packed so be sure and make reservations if you intend to have dinner.

It had been two years since we had stayed here and it was like going for the first time with all the changes they have made. If you don't know anything about Fred Harvey I would encourage you to do some reading about him.
How fun to enjoy the snow but not full time.
Posted by Changes in the wind at 5:46 AM 3 comments:

You are invited to the party!
http://www.frontiernet.net/~jimdandy/specials/xmas.htm 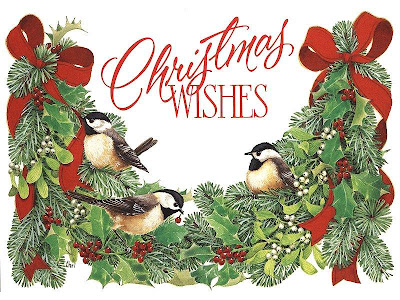 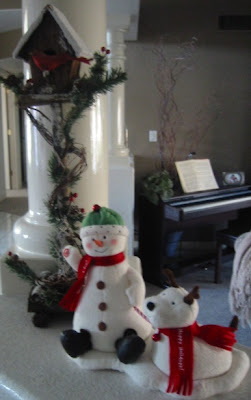 My daughter gave me the little Santa and dog....You squeeze his hand and they sing "Jingle Bells".... My parrot goes nuts with this duet. 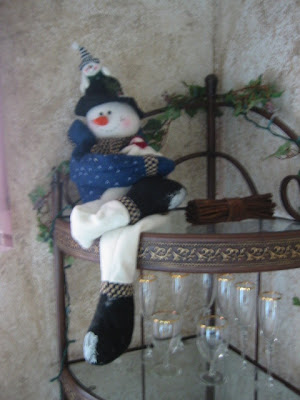 Got this at Savers one year for near nothing....love how relaxed he looks:) 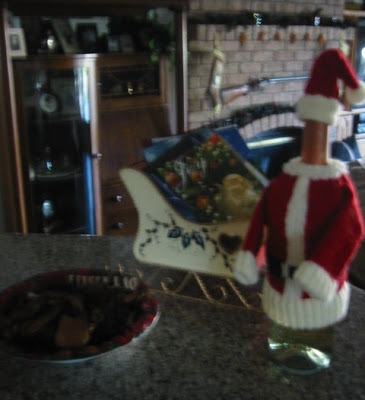 This is my new addition...a wine bottle Santa Sweater and hat....just couldn't resist!
Good thing I didn't see this while out shopping....My dogs would hate me! 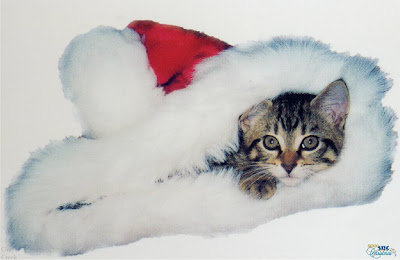 These cinnamon ornaments are wonderful!! 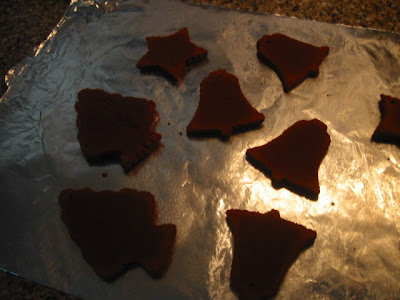 You can find the recipe here. I got this info from farmchick but what I didn't know is that they make quite a few, so along with having enough to hang on my mantle, I will have a few to give away.....There are two ladies at my church in wheelchairs and they live in care facilities so think it will be a perfect little gift for them and also for a deaf friend who is single and lives in an apt. I can't wait to give them to them and hang mine up.......smells so good.
Here is a side tip for you........ 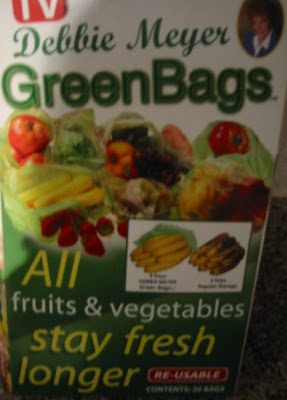 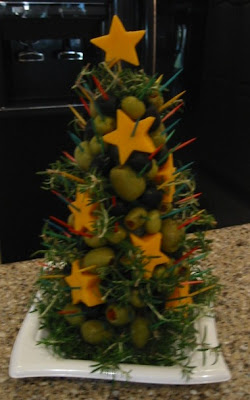 Made this for a party I was invited to this past Sat.
The greenery is sprigs of rosemary.
Posted by Changes in the wind at 5:56 AM 3 comments: 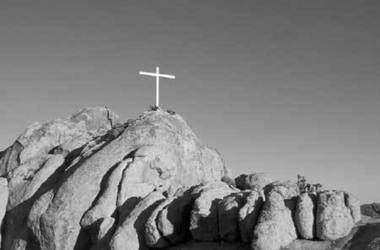 Sunrise cross honoring World War ll veterans in the Arizona Mohave Desert
Part of an opinion written by Rees Lloyd
On Veterans Day, many Americans visited veterans memorials as Americans have for years. Today, however, veterans memorials on public land are under threat from establishment of religion clause lawsuits.
These lawsuits are being filed by the American Civil Liberties Union on the behalf of individuals who complain that they are offended by the sight of a cross at a veterans memorial. Although generally unknown to most Americans, the ACLU seeks and receives millions in judge-ordered, taxpayer-paid attorneys' fees in these cases.
The U.S. Supreme Court will render its decision this term in one such case (Buono v. Salazar) regarding a World War II veterans memorial cross in the Mojave Desert National Preserve ("Supreme Court at crossroads over fate of Mojave cross," Oct. 8). A similar case involving a veterans memorial cross at Mount Soledad is before the 9th U.S. Circuit Court of Appeals (Trunk, et al. v. U.S.). It also appears certain to go to the U.S. Supreme Court.
At stake in these court cases is whether 300 million Americans shall have the right to choose how they will honor their war dead and other veterans or whether a veto power over those decisions shall be held by the ACLU or a single individual who claims "offense" at the sight of a cross honoring veterans. Thus, the importance of these court cases cannot be overstated.
However, I respectfully suggest that such issues, which fundamentally affect and shape our national culture and character, should not be decided by the courts. It is time for Congress to act to protect our veterans memorials from abusive Establishment Clause lawsuits by the ACLU, which has become the Taliban of American liberal secularism, and other fanatical organizations.


I agree with this opinion for the most part however, I am not sure our current Congress would be any better suited to making a decision. This cross now has a box built over so as not to be seen until the court's decision is made.

The argument used in this case is that this cross is on government land and our United States Constitution says there is to be separation between church and State.

Did you know that "separation of church and state" does not actually appear in the constitution? It is an Amendment and is a concept derived from the following letter that Thomas Jefferson wrote:
To Messrs. Nehemiah Dodge and Others, a Committee of the Danbury Baptist Association, in the State of Connecticut. January 1, 1802.
by Thomas Jefferson

Gentlemen, — The affectionate sentiments of esteem and approbation which you are so good as to express towards me, on behalf of the Danbury Baptist Association, give me the highest satisfaction. My duties dictate a faithful and zealous pursuit of the interests of my constituents, and in proportion as they are persuaded of my fidelity to those duties, the discharge of them becomes more and more pleasing.
Believing with you that religion is a matter which lies solely between man and his God, that he owes account to none other for his faith or his worship, that the legislative powers of government reach actions only, and not opinions, I contemplate with sovereign reverence that act of the whole American people which declared that their legislature should “make no law respecting an establishment of religion, or prohibiting the free exercise thereof,” thus building a wall of separation between church and State. Adhering to this expression of the supreme will of the nation in behalf of the rights of conscience, I shall see with sincere satisfaction the progress of those sentiments which tend to restore to man all his natural rights, convinced he has no natural right in opposition to his social duties.
I reciprocate your kind prayers for the protection and blessing of the common Father and Creator of man, and tender you for yourselves and your religious association, assurances of my high respect and esteem.
( Thomas Jefferson, letter to the Danbury Baptist Association, January 1, 1802; from Merrill D. Peterson, ed., Thomas Jefferson: Writings, New York: Library of America, 1994, p. 510. )

If the ACLU and our courts truly believes that this amendment to our constitution means that it is wrong to have a cross on government property than I think they have started at the wrong location....they shouldn't have jumped on this cross out in the middle of nowhere that was erected to honor those brave men that died so that they could holler they are being offended...no, they should start here at this United States owned graveyard. 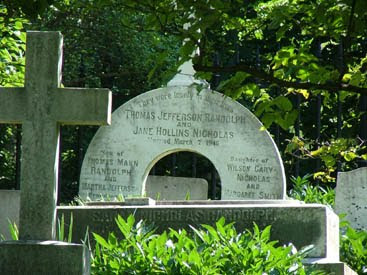 Monticello estates willed to the government by Thomas Jefferson himself and located in Va. where he is buried. You see the arched stone with a cross on top? That is the tombstone of Thomas Jefferson's grandson.
Listen folks....the acorn has fallen so far from the tree it doesn't even know it's an acorn!
Posted by Changes in the wind at 6:38 AM 2 comments:

The Origin of the Barber Pole

The modern barber pole originated in the days when bloodletting was one of the principal duties of the barber. The two spiral ribbons painted around the pole represent the two long bandages, one twisted around the arm before bleeding, and the other used to bind is afterward. Originally, when not in use, the pole with a bandage wound around it, so that both might be together when needed, was hung at the door as a sign. But later, for convenience, instead of hanging out the original pole, another one was painted in imitation of it and given a permanent place on the outside of the shop. This was the beginning of the modern barber pole.

When I was a girl I use to walk by one of these and it always made me happy with it's bright colors...would never have guessed this is what it represented.
Posted by Changes in the wind at 5:56 AM 5 comments: