This statement from Chatty Crone sums up any questions you may have and needs to be repeated.


Why do we need to get healthy?????
We're going to get a health care plan shoved down our throats that is written by a committee whose head says he doesn't understand it, passed by a Congress that hasn't read it but exempts themselves from it, signed by a President that also hasn't read it, and who smokes, with funding administered by a Treasury Chief who didn't pay his taxes, overseen by a Surgeon General who is obese and financed by a Country that's nearly broke.


For a little added information as of Aug 21, 2009 there were 32 appointed Czars that are making an average $120,000.00 and answering to whomever and it didn't include the newly appointed Tobacco Czar who hopefully starts his campaign/watchdoging at the White House.
Now don't misunderstand me.....As long as smoking is legal there should be NO ONE forcing you to quit and that includes President Obama.

I am a very happy ex-smoker but it was by MY choice...not the Government's.
Posted by Changes in the wind at 9:29 AM 4 comments:

While at my dentist for my 6 month checkup he shared the following story:

My parents live in Minnesota and have all their lives and so for their upcoming 70th wedding anniversary my siblings and I decided to rent the local town hall and have a party and celebrate. We asked my Dad to compose an invitation list and was shocked to find 800 people on his list! We chucked the lite dinner, cake and ice cream idea to only cake and ice cream and indeed there were over 680 people that attended.
Now my parents are in their mid 90's but my Dad had such a good time he put down a deposit for the town hall for their 75th wedding anniversary. 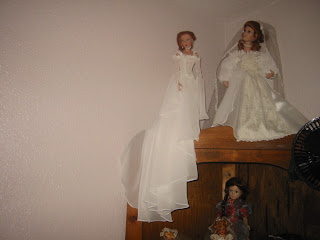 Here are a few more of my favorite things found in the doll room...... Some beautiful brides

A very old pair of bookends that were my Mom's 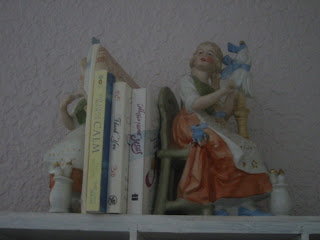 A collection of mini dolls 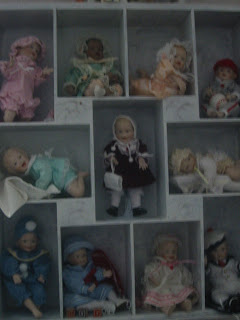 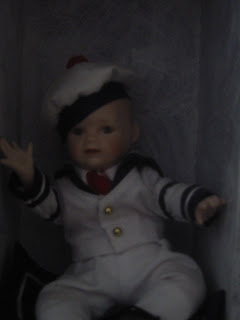 These are little porcelain dolls 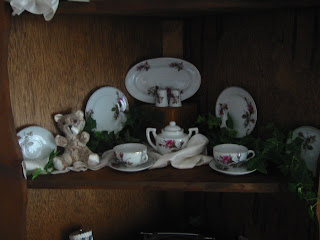 A set of china dishes that were mine as a girl 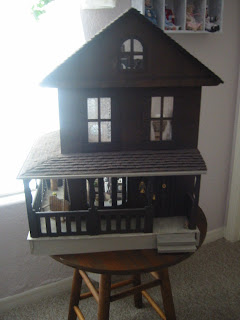 The doll house I made during the O.J. Simpson trial. There is a little story that goes with this. I bought it already put together with the idea of just doing the decorating part but after I got it home I realized that it had been put together with a hot glue gun and there was glue everywhere! I called a store that specialized in doll room things and they told me to just take a hair dryer and I could melt the glue and take it all apart...sure enough so basicly I did start from scratch and yes I did the shingle roof and the electric inside for the lights.
It sits on this stool and revolves so you can see inside................................ 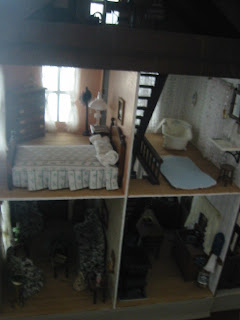 There are dolls in unexpected places 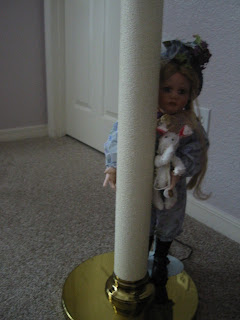 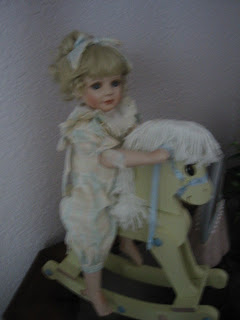 and dolls with top billing 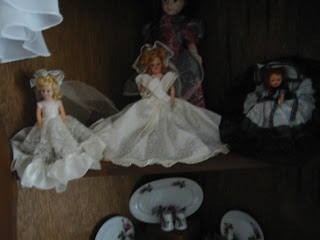 Old dolls that were mine as a girl


Dolls that were gifts 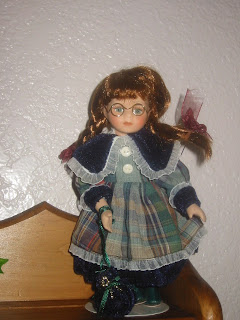 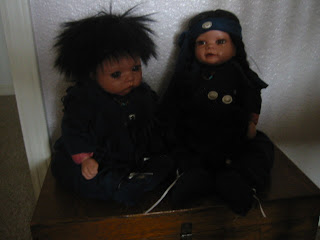 and pretty much dolls everywhere! 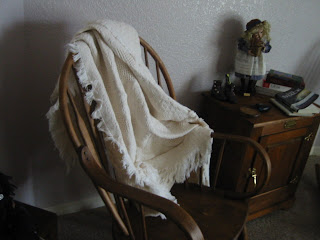 I recently bought this baby quilt at my favorite secondhand store for $3.00 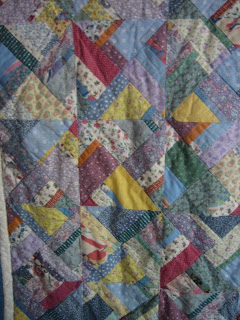 with the intention of making booties and hat and etc. and giving them to my Charity but after I got home and looked at it more closely.............. 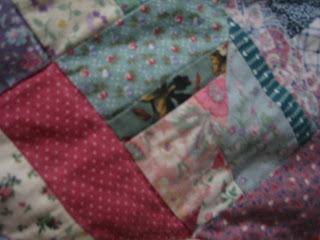 I fell in love with it and wanted to keep it. It is truly amazing to me because it has so many little tiny pieces that have been lovingly sewn in 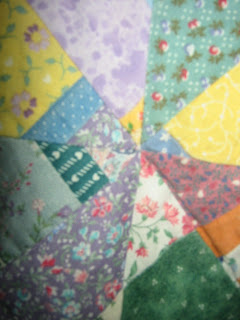 Focus on the bright yellow piece and that was not the smallest as noted by the little tiny pink piece next to the green with hearts piece. I do not quilt and have no idea what this pattern is but this is what I DO know......this represents hours and hours of labor. This is the side binding which incorporates the back piece by folding it to the front 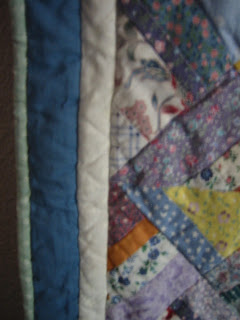 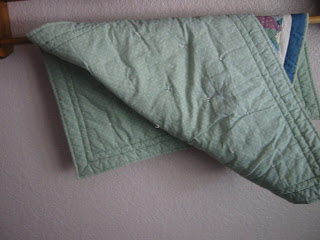 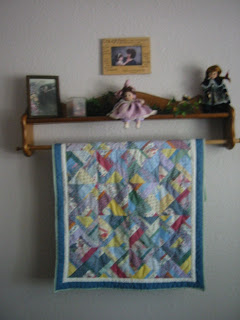 Success!! This is my doll room and the walls are painted a light lavender which I have not been too sure I liked until the quilt.....it just make the whole thing pop and come together.
Now you may ask me why in the world I have a doll room and so here is the answer. This room was suppose to be an office when we built the house but it became a bedroom for a surprise grandson instead and I squeezed the office in another location which we ended up liking so after grandson left didn't know what to do with this room and sure didn't need two guest rooms! So came the doll room which has many favorite things of mine like the picture you see above the quilt....here is a closer look....... 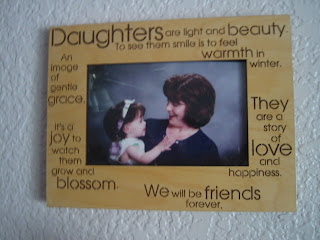 This is my daughter and my Grand-daughter taken almost 11 years ago now. Maybe I will show you a few more of my favorite things in my doll room another day. It is a place I come and sit to be quiet and it also has a treadmill that stays pretty quiet too:)
On one of my favorite blogs Wyoming Breezes , Nancy showed how she had put labels on the back of all her quilts and oh how I wish this would have had one...I would love to know the who, when and where but to whoever made it I say...thank you and welcome home my lovely little quilt of many colors.
Posted by Changes in the wind at 6:47 AM 7 comments:

Pain in the neck

No, I am not talking politics.....I really have pain in my neck/shoulder 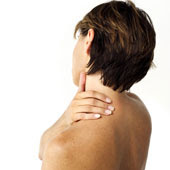 Most of you know that I knit/crochet for charity and recently I picked up the crochet hook instead of the knitting needles and.......Yikes, my shoulder is killing me! I bought a paraffin wax machine to ease the pain in my hands

which really works by the way

but the shoulder doesn't fit.

All of this is just a way to introduce you to the re-birth of my blog RamblingRae which will focus on this passion. Stop in if knitting/crocheting and charity are a interest to you.

PS....I have to say I am getting a little discouraged with the Strings blog......... My vision of having many authors all donating to it is not coming to fruition.........Won't you think about joining in??
Posted by Changes in the wind at 7:46 AM 4 comments:

A friend of mine sent me this video and I have to tell you........it woke up the lion in me. There are some parts that I am not sure of the accuracy (Obama's birth certificate) and I know that he has been labeled a right wing nut by some but please listen all the way through and you will indeed have to stop and think twice....

Alan Keys
When he said "we better stop laughing", it hit a nerve with me! and I just have to say.......
Conservatives best stop laughing with the attitude that Obama and those democrats are being proven wrong and Democrats better stop and think if they really want to go along with having our United States of America torn apart, weakened and eventually destroyed.
Many people are beginning to stand up in different ways......There are several states that have already declared State Sovereignty from the government and I am proud to say that Arizona is one of them. I am also pleased to see how many people are going to these town hall meetings and speaking up and I encourage them to do more. I too am going to begin to stand up more by applying many of the suggestions found in the article below:
Topic: Political Correctness Ten Ways Conservatives Can Fight Back
by Nancy Morgan(libertarian)Friday, February 6, 2009
Are you fed up with political correctness?
Tired of the way our language is being redefined?
Angry at stupid proposals, never ending crisis' and corrupt politicians?
Offended by the patronizing elites?
If so, its time to start fighting back.
Don't underestimate the power of example. By employing these ten easy steps, one person can make a difference:
1. Support capitalism - (no-one else is). Say it often and loudly:
Profit is not a dirty word.
Crony capitalism is bad. Free market capitalism is good.
2. Banish the word 'stimulus' from your vocabulary. The correct word is government spending.
3. Stop tolerating lies and liars. A lie is a lie, not a misstatement. Lies are bad and liars are not trustworthy. Even if they're media darlings.
4. Do not rely on the government for ANYTHING. Remember what Reagan said: "Government is the problem, not the solution." Spread the word.
5. Never, ever again lower your voice when you mention race, blacks, Negroes or whatever the Politically Correct word for African-Americans is. 5a: Stop using hyphens when referring to Americans.
6. Cancel your subscriptions to all liberal media and stop watching NBC, CBS, ABC, etc. They have lost all credibility and don't deserve your support.
7. Start being judgmental. Its called 'having an opinion'.
8. Quit stifling your opinion when surrounded by lock-step liberals. Your opinion is just as valid as anyone's, despite what the elites may think. The PC idiots can only censor you if you let them. You never agreed to or voted for the current politically correct rules and you are not obliged to follow them.
9. Ignore the 'experts'. Remember, just because everyone says something is so, doesn't make it so. By not challenging 'expert opinion', you enable it. Keep in mind that most of our current 'experts' are educated way beyond their intelligence. 9a. Employ the 'experts' test: Just ask yourself, who benefits? Chances are good its not you. If that doesn't work, just follow the money.
10. Most importantly, say 5 times a day: 'Sticks and stones may break my bones but words will never hurt me'. Stifling dissent by labeling the dissenter a racist, homophobe, meanspirited, etc. is one of the left's most effective tactics. If anyone tries to discredit you by using these labels, immediately recognize that they're group-think, useful idiots whose opinions are formed by others. Act accordingly.
If you follow these ten steps, others will follow. Before you know it, you'll soon be able to say God Bless America without fear of censure or embarrassment. You'll be able, once again, to take pride in merit, success, true achievement, God and country instead of being forced to worship at the alter of political correctness, diversity, multiculturalism and equality of outcome.
Now I know that there are some Christian views out there that we are in the end times and etc. but whatever happen to "Not on my watch"? 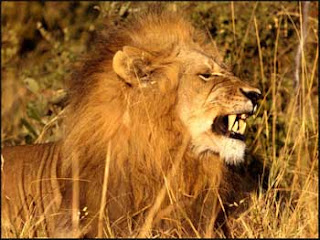