Well I still can't add any pictures so here goes a boring post:)


Last night we went to one of our regular eating places. I am not going to give the name of it because I do not want them to be taken advantage of but this is what happened.


We always sit at the bar and there was a couple sitting down from us. They appeared to order mostly appetizer type things and weren't very nice to the waitress like making room for the big platter of chips she brought out and etc. Well, anyhow they ate everything in sight and then they had a problem....Their food didn't look like the picture on the menu and they just didn't enjoy it.


Really this is the truth....The manager was called and she sucked up to them like water on a paper towel. I am not sure if she discounted the food or what but she just smiled and agreed with them AND apologized.


I was dumb struck. It just wouldn't pay for me to be a manager if that is what the job requires and our server said it does because the business doesn't want any complaints against it so I guess it doesn't matter how ridiculous your complaint is you will get your way. Just another incident of how crazy our world is today.

I can't attach any pictures....anyone else having this problem? I remember one time before there was a problem with it and we somehow by-passed it but can't remember what I did. For me, if I can't post a picture there just isn't any reason to post:(
Posted by Changes in the wind at 7:26 AM 5 comments:


After reading the recent post on "Fools Rush In" where she made this statement "Pigs have long symbolized progress. A pig can't turn his head to look back without turning completely around, so it's believed that pigs are always looking to the future." I became more curious about pigs so did some checking and found some of the most amazing facts.....

Did you know that pigs are ranked #4 in animal intelligence? Chimpanzees are ranked at the top together with the gorilla, orangutan, baboon, gibbon and monkey. Dolphins and killer whales are ranked #2. Elephants are #3. Pigs are #4 They are very intelligent and can learn to do tricks faster than dogs. They have learned to push a lever in the barnyard to get a drink of water or a dish of food, and have been taught to tumble, dance, and even pull a cart.


Mostly know as “pig, hog, porker or swine” but to be more precise, a male pig is a boar. A castrated male is a barrow. A female pig who has not been bred yet is a gilt. And a female pig who has had piglets (baby pigs) is a sow. A sow can give birth to a litter containing 7 to 12 piglets about twice a year and only requires a little less than four months to do so.

A full grown pig can drink up to 14 gallons of water a day and Pigs have four toes on each foot and each toe ends in a hoof. They only walk on the two middle toes on each foot so they look as if they are on their tiptoes. 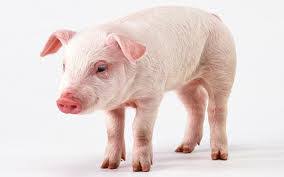 A pig's squeal can range from 110 to 115 decibels. Compare that to the take-off sound of a jet engine - about 112 decibels 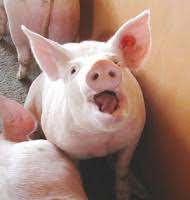 Pigs like to wallow in mud so most people think they are dirty but the fact is pigs do not have functional sweat glands, so they can't perspire to cool themselves. They roll around in the mud to cool their skin and to protect their skin form sunburn, flies and insect bites. 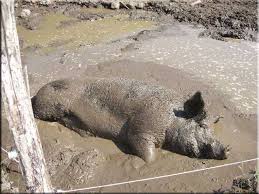 Ever see a pig with a ring in its nose?
There is a reason for this.....You see pigs have a powerful sense of smell. and some farmers put rings in pigs' noses to keep them from rooting, or digging up the earth with their snouts and causing damage to their farms. In fact soldier pigs have gone to war. On battlefields, they have used their sensitive snouts as mine sniffers.  In the forests of Europe and North America some pigs are trained to root for truffles, a delicacy that grows underground.
.
Here is the reason for some well known sayings:
The saying "living high on the hog" started among enlisted men in the U.S. Army who received shoulder and leg cuts of pork while officers received the top loin cuts. “ The top brass was living high on the hog.

"Don’t buy a pig in a poke?" That comes from the 17th century England when it was a common trick to try to give away a cat to an unsuspecting shopper buying a suckling (young) pig. Upon arriving home when he opened the poke (sack), he "let the cat out of the bag," and found he had been cheated.

See all 4 photos
Think pork fat is a waste? Here are just a few of the many products made from it: Cosmetics, floor wax, crayons, chalk, weed killers, anti-freeze, glass, china, adhesives, plastics, paint, chewing gum, shoes, and many more.
.
Here area a few more amazing things derived from pigs...Pig heart valves have been used to replace damaged human heart valves.
Insulin and more than 40 other pharmaceuticals and medicines are derived from pig products.

and of course we wouldn't want to forget our piggy banks...
How they got their names? You can discover here.

There are around 2 billion domestic pigs on the planet 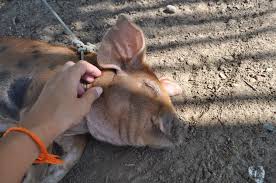 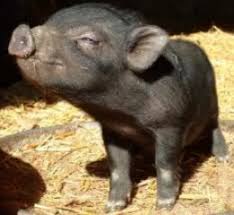 who greeted us with a wiggling tail and stole my heart.
Hope you too have a little different view of a pigs now like I do.
Posted by Changes in the wind at 8:04 AM 4 comments:

Labels: Do you know?, Interesting 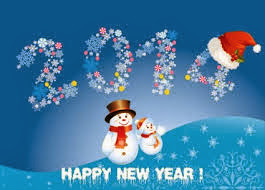