Hubby wanted to take a week-end jaunt. It gets harder and harder to come up with anything new that is close by so we decided to take a trip back in our past. You see we grew up on western Arizona part of route 66; In fact I spent the early part of my childhood in the display window of my folks grocery store.........a whole other post someday.

Living in that little town of Ash Fork, our rival schools were Seligman and Williams so of course we went there often and before I40 bypassed all these little towns it was the only way to get to Kingman/Las Vegas and etc. It had been nearly 40 years since we had been down the old road to the little town of Seligman. They have worked very hard to capitalize on the route 66 interest and in fact many of the original places are still there and open. I was hoping that the Copper Cart restaurant would be open because my folks and I would often drive over and have dinner there.

I remember they had these lantern type lights and my Dad always had a rib eye steak. One time on our drive back home a rock next to the road and our car was struck by lightening...raised the hair on our arms! Well, they weren't open that day so we had lunch at 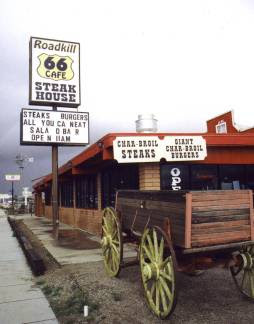 This was not original but the lunch was good. We headed on down the road towards Peach Springs. I had thought we might go to

the newly built sky walk out over the Grand Canyon and only miles from here until I checked out the price....nearly $60.00 per person. It has brought a nice hotel and restaurant to the nearly distinct little town. If fact all of the other little towns along the way were nearly distinct but hubby had mentioned how he remembered how pretty the little town of Valentine was and indeed if it would been summer instead of winter, it would have been beautiful. This little town was kept alive for years by the tradition of people sending their valentine cards here to be stamped with the little heart shaped stamp of Valentine until Aug. 15, 1990 when the postmaster was shot, robbed and left to die.
We traveled on to Kingman and then took 93 to Laughlin....the little gambling town on the river...

spent the night here and came out $80.00 ahead on a penny machine!! Unheard of for me but told hubby....it is really fun to gamble when you win!

Next day we headed back towards Phoenix on 93 but then did the 89 cut off at Kirkland Junction and went to Bagdad.....another memory moment. Over 30 years ago we came here often to compete in fast draw. You come to this copper mining town and you best have all your business done by dark because everything shut down with the exception of the bar back then and when you come here, you can go no where else..... Have to turn around an go back the way you came.
I was hoping that the drive in theater would still be here because I wanted to get a picture of it to show you.....the screen was on a little hill top and then there was a gorge and you parked on another little hilltop across the way. It was quite a sight but sadly no longer there; If fact we couldn't really find anything that was as we remembered.

We undertook the curvy hills of Iron Springs road (some in snow) and on to Bucky's Casino overlooking Prescott, Az. If you have never stayed here give it a try....nice restaurant, rooms and beautiful view. Headed on home the next morning and that was our 580 mile week-end jaunt.
Posted by Changes in the wind at 8:37 AM 3 comments:

Last Thursday was another Granddaughter day (she gets a early release from school and I pick her up and we spend a few hours together). I try to have a project/craft for us to do and she is really good about giving it a go and not complaining.

Well, after learning that she loves lemon anything I decided we would make a homemade, totally from scratch, lemon meringue pie. We started with the crust and she had never seen lard...we got to the part of rolling it out and she just couldn't hardly wait to give it a try. She had to stop fairly often to clean up the edges...they bothered her if the weren't nice and round. Got it into the pan and told her we would need to prick the bottom with a fork......she just squealed....this was something she had done on her wii cooking game but had no idea you really did it! After the crust was cooked and cooled we started on the lemon filling. I told her we would do it TV style (get all the ingredients measured and ready to use so we needed to juice the lemons and when she saw this

she said "Oh grandma, I have always wanted to do that".....well, juice lemons she did. It has been a long while since I have made a homemade pie but I was reminded this was her very first.......the consistant stirring of the filling was not her favorite part......seperating eggs was the challenging part and meringue was amazing to her.

(I had to borrow my pictures from computerland because my computer won't download my pictures from my camera disk) It wasn't quite this pretty but mmmmm good. After having a few small pieces with Grandpa...the rest went home with her to surprise Mom and Dad.
Now, you need to understand she is full of youth so her thoughts were.......so, what's next? 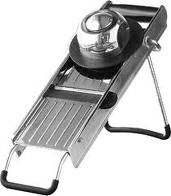 (this gizmo is a wonder) or a thin sharp knife, slice potatoes approximately 1/16 inch to 1/8 inch thick. To remove potato starch, rinse the slices in a bowl of cold water; change the water twice. Pat the slices thoroughly dry with paper towels.
Sprinkle the slices with salt or your choice of spices or herbs. If you have a microwave bacon tray, place the sliced potatoes flat on the tray in a single layer. If you don not have a bacon tray, use a microwave-safe casserole dish. Rub the inside of the dish with some olive oil or spray with no-stick spray.
Cover with a microwavable round heavy plastic cover. Microwave on HIGH for 4 minutes; turn slices over and continue to microwave on high another 3 to 5 minutes. Potatoes are done when they are lightly browned (if they aren't browned, they won't get crisp).
I had seen this recipe online and thought it was interesting......
Granddaughter was sure it wouldn't work but after eating three potatoes we both decided......
IT IS WONDERFUL!!!! they are so good and fat free!
Posted by Changes in the wind at 5:54 AM 9 comments: Tiger
It hunts at night.
Unlike a house cat, it likes water and swims well.
Retracts its claws when it walks, leaving no claw marks in its tracks.
Its roar can be heard as far as two miles away.
Has stripes as unique as fingerprints.
Has striped skin as well as fur!
Posted by Changes in the wind at 6:17 AM 5 comments:

Friday, hubby took me to a western store to see about getting a new pair of boots. I tried them ALL on including this sexy little number

I put one on and went traipsing up to the mirror telling hubby "Look at these!"

Yep, you guessed it

ankle twisted and I went right down on my (arse). The first thing I did is hope no one saw me, the second thing I did was try to get up and the last thing I did was wonder what I hurt. It is a little dangerous falling when you are in your 60's. Well, thank goodness for this nice little layer of fat I have, because I must have bounced and only have a sore ankle.....

and just as soon as I am no longer gimpy, I can wear my new boots.

Note to self: Showing off doesn't pay
Posted by Changes in the wind at 8:02 AM 8 comments:

I took this knitting kit with me to a local gun show this week-end, thinking I would be able to get a good start on it...........WRONG!


Well, I guess it didn't help that I have never changed yarn on a project before and of course this 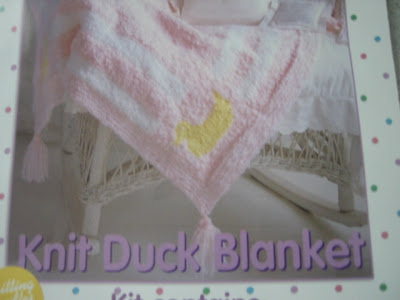 is a constant requirement for this pattern, nor have I ever followed directions from a chart 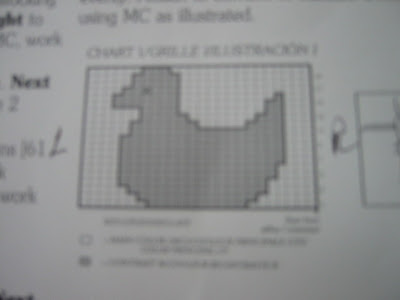 Need I say more........ I did manage to get half way up the duck and then rip it all out (fortunately this blanket is made in three strips)....for the third time.
Well, I am back home where things are more quiet and I have more than just my lap to hold three balls of yard and the directions on so Maybe I can make it work. Why in the world did I buy such a kit? Well, it was only $9.00 on ebay and included everything including the needles